As part of our Heritage Lottery funded projects, we will be doing a lot of work talking to children and young people about their local histories and drawing on their own experiences – through photography, video, oral history, artwork, and other means – to develop our archive for future generations. 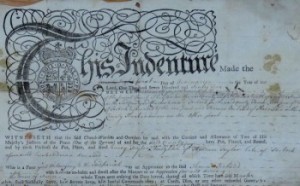 It’s probably not that surprising that many of the young people we have worked with so far have been drawn to items in our archive that reveal details of how people of their age lived in the past. Amongst the items that attract a lot of attention are some of the many apprenticeship indentures we hold. These documents can be incredibly powerful glimpses into the unfamiliar experiences youngsters of the past faced. Much of the language used in these documents is strange and foreboding; in some cases they use words that have connotations that can sound chilling to our modern ears. It is fascinating for us to think about how these words would have sounded to the children these documents concerned.

Take Mary Taylor, for example. In 1762, aged just 9, Mary, an orphan, was signed up by the Overseers of the Poor (itself a pretty intimidating title!) to be an apprentice to Thomas Ireland for seven years. The word that can especially surprise modern readers is the role Mary was being apprenticed into: “housewifery.” Understandably, when we have spoken about this indenture with young people, horrifying concerns about the kinds of abuse Mary may have faced spring to mind. Even taking away the title of her apprenticeship role, for many contemporary audiences the very idea of a nine year old child being apprenticed (almost certainly with little say in the matter) to a man she may well have not known for seven years, swallowing up the rest of her childhood, and with very few rights as we would recognise them, is awful enough. But that role – “housewifery” – is bound to catch

the attention of young people living in today’s society; perhaps most keenly because it suggests a married relationship between a nine year old girl and an adult man. Of course, this wasn’t what a “housewifery” apprenticeship meant; in the same way that a boy apprenticed in husbandry was not being married off. Mary would have been employed in duties that were probably quite menial in nature. If she was lucky, she may have acquired some skills from other people in the household that would be useful to her when her apprenticeship ended. Still, the power of language and these archival documents to educate and challenge perceptions is a wonderful tool when working with children and young people.

As we gather memories and experiences from today’s young people, I wonder what will stand out to future generations and challenge their own notions of how young people used to live and, ultimately, their own lives.